The human requirement for vitamins, minerals and other nutrients remains relatively constant throughout adult life. Unfortunately our ability to properly digest food and absorb vital nutrients declines with advancing age. Surprisingly, one of the most common age-related causes of impaired digestive function is the reduction of hydrochloric acid produced by the stomach.

Hydrochloric acid (HCl) is an important gastric (stomach) secretion that enables the body to break down proteins, activate important enzymes and hormones, and protect against bacterial overgrowth in the gut. Achlorhydria (the complete absence of stomach acid) and hypochlorhydria (low stomach acid) are common digestive problems. Symptoms of low stomach acid include heartburn, indigestion and bloating, among others (Table 1). Additionally, a number of chronic health conditions are correlated with impaired acid secretion, including allergies, asthma and gallstones (Table 2). 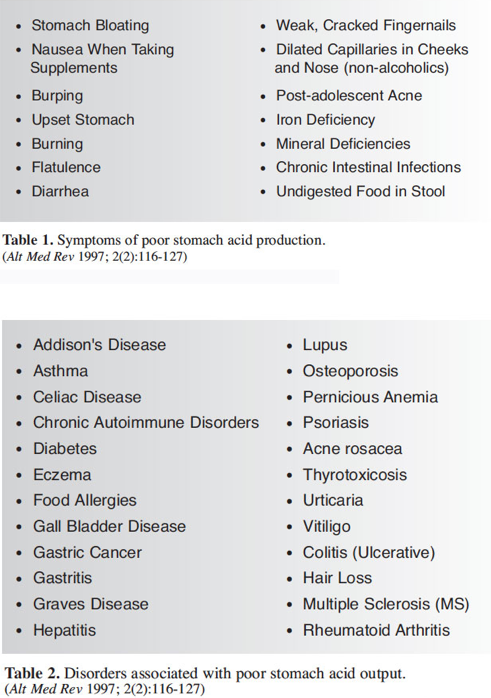 Digestion is a complex body function that starts when food enters the mouth and continues as material is processed and passed on to the stomach, small intestine and large intestine. In the stomach, digestion begins with the release of a number of gastric secretions, including HCl, pepsinogen and a protective mucus coating. Secretion of hydrochloric acid and pepsin is a prerequisite for healthy digestion. Normally the stomach contains enough free hydrochloric acid (HCl) to maintain a constant stomach acidity of between pH 1 and 2. The amount of HCl produced increases rapidly following the ingestion of food. HCl has an important role in the digestion and absorption of a number of nutrients, including:

Numerous studies have shown that hydrochloric acid secretion declines with advancing age (Fig. 1). In one study US researchers found that over 30 percent of men and women past the age of 60 suffer from atrophic gastritis, a condition marked by little or no acid secretion.(8) A second study found that up to 40% of postmenopausal women have no basal gastric acid secretions.(9) 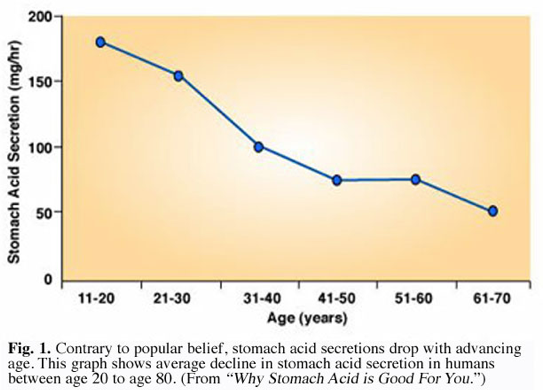 In a second study involving 3,484 subjects, researchers found that among both males and females, 27% suffered from achlorhydria, with the greatest incidence (39.8%) occurring in females aged 80 to 89 years.(10)

Researchers in Japan have also measured a similar age-related drop in gastric acidity in elderly Japanese subjects. In 1984 researchers found that 60 percent of Japanese men and women over 50 years age suffered from achlorhydria. New research based on data collected from 1989 to 1999 continued to substantiate a substantial age-related decrease in stomach acid production, though the total percentage of achlorhydric subjects dropped from 60 percent to 40 percent.(7)

Symptoms of low stomach acid frequently occur several hours after eating and can include a desire to eat when not hungry, a sense of fullness after meals, flatulence, constipation and diarrhea. Symptoms that may persist regardless of eating food can include feeling soreness and burning of the mouth.(10)

Heartburn, a burning sensation in the chest caused by the regurgitation of bile through the stomach into the lower esophagus, is a frequent symptom of low gastric acid. The traditional approach of treating heartburn is to suppress gastric acid by taking antacids, Proton Pump Inhibitors (PPIs) or alkalizers. This approach is the opposite of what should often be done, and in many cases only worsens the problem by suppressing gastric acidity when it is needed and promoting it (rebound phenomenon) when it is unnecessary.

Jonathan Wright, MD, states, “In 24 years of nutritionally oriented practice, I’ve worked with thousands of individuals who’ve found the cause of their heartburn and indigestion to be low stomach acidity. In nearly all of these folks, symptoms have been relieved and digestion improved when they’ve taken supplemental hydrochloric acid and pepsin capsules. (Certainly it would be preferable that our stomach production of hydrochloric acid and pepsin be restored on its own, but a reliable way to do this hasn’t been found.)”(11)

Hydrochloric acid was routinely prescribed for many symptoms and clinical conditions for over 100 years. Use of HCl by the medical establishment began to decline in the late 1920s. The decline in HCl replacement therapy, according to Jonathan Wright, was due to poorly designed and misinterpreted research that convinced medical practitioners that HCl and pepsin replacement therapy was not necessary.

“Encouraged by the legal drug industry, medical students are not taught that hypochlorhydria (inadequate stomach acid production) is treatable only with unpatentable, natural replacement therapies. Instead, their education concentrates on hyperchlorhydria (excess stomach acid production) and its treatment with patentable acid blocker drugs and highly profitable over-the-counter antacids.”(11)

Hydrochloric acid has been shown to be effective in relieving symptoms associated with achlorhydria and hypochlorhydria. Substances shown to support healthy acid secretion and digestion include:

Healthy digestion and absorption of nutrients is dependent upon the secretion of gastric acid. When gastric secretions are reduced the result can lead to nutritional deficiencies and a variety of chronic disorders. Low secretion of gastric acid can also allow orally-ingested pathogens to prevail and contribute to their overgrowth in the stomach and small intestine. HCl supplementation is a safe and effective means of restoring normal gastric levels, particularly in cases where age or chronic conditions indicate that nutrients, particularly B vitamins and minerals, are not being properly utilized.